August 22
Seth McGhee reports: PUMAs were consistently at the prairie Aug 9-13. Numbers ranged from 9-11. They sparsely landed on the house in August.  2 were flying above the prairie on 9/15 and we haven’t seen any since.

Visitors will miss their chatter and activities. The monitoring team will winterize the house by October and prepare for the next season in March 2022.

Two nestlings at Gourd A. Photo David Liebl.
July 9
​Chuck Henrikson reports: I visited the PUMA house and gourds this morning, once at 8:15 and then again at 9:00.  I did not bring down the house and gourds to look inside the various compartments.  I simply watched from the outside.
The most adult and subadults I saw at the house and gourds were 12 but they were coming and going a lot so there could have been more.  I did see the adults and subadults go into some of the gourds and some of the numbered compartments but I did not record the letters or numbers.

I did see a pair of heads, which I assume to be nestlings, sticking their heads out of the entrance to Gourd A.  I think they are about to fledge or have fledged and have returned to the gourd. I did see an adult or subadult bring food twice to the heads in Gourd A.  Each time the feeding was on the fly.
July 6
Nestlings are growing fast. Seth McGee reported that they poking their heads out of Gourds A and B, waiting for food and just being curious. Counting 28 days from the day of hatching, the nestlings in Gourd A could now fledge any day – July 7-11. Keep watching and let us know, if you observe any fledging event. Be sure to have your camera ready!
July 1
Seth McGee reports: I lowered the house with the Prairie Partner Interns this afternoon.  The nestlings are chattery and the parents are rapidly bringing dragonflies and mayflies.
Here is the data collected by the interns:

7/1/21 2:15pm
#4.  3 young, 1 egg (probably another nestling or egg but it wasn’t visible in the pile).
#11.  5 young. Mites present.
#14. PUMA nest, including green leaves. No eggs. Mites present.
Mites are now throughout the structure but seem to be overall less abundant on the exterior of the gourds compared to last week.  No HOSP or HOSP nesting material observed in the house.  An Eastern Phoebe landed on the rod at the top of the house and sat for a few seconds.  Haven't seen that before.  No noticeable interaction with the martins.
June 28
Richard Ness reports:  I checked the house again and here are the results.
Gourd A : Has all 6 young which are getting really big now and soon will fledge.

Mites are crawling over everywhere can’t open the lid without getting mites all over my hand, yet the birds seem ok.

#  4:   Has 5 eggs
# 11: Has 5 young
# 14: Has no eggs
No new Martin nests or House Sparrow nests. Last time on the 22nd I removed the H.S. nest material from #12 and they have not returned. This time I checked the H.S. nest in #5 and there were still no eggs so I removed the nest after observing that there was no H.S. activity at the house on Monday at noon.
Total number of young birds is 19.  I think that all the eggs should of hatched by now but I will find out on the next check.
June 23
Seth McGee reports: I noticed via binoculars what look like nest mites on the exterior of gourd A today.  I'll lower the house and confirm tomorrow but I wanted to mention it now in case any of you plan to check the colony before I get to it.
June 22
Richard Ness: This morning I checked on the house again. For the first time I have some bad news. Nest number 14 last check on June 16th had 4 eggs, today I found only 2 broken eggs in the nest. I think that the nest may have been damaged by House Sparrows because there is a HS. nesting in number 12 right above number 14 that was not there on the 16th. I observed HS. on that side of the house yesterday and today for the first time. In fact,  I saw two pairs of HS at the house at the same time this morning and they seemed comfortable with each other’s presence at the house. This is not good.
There was no other change in the number of young or eggs for the other nests since the 16th, so we are down 4 eggs in total. It maybe still early enough that the Martin pair may try and lay more eggs I am not sure.
I am still trying to trap the H.S. in my birdhouse trap on the fence post, but no luck in over two weeks.

June 16
Richard Ness reports: "I checked on the Martins yesterday 6/16/2021, and it was nice to see everyone there enjoying the Martins on such a beautiful day. This was at noon.
We now have two nests with young. Total of 11.

Also present for the noon monitoring were Seth McGee with his group of awesome Biocore interns, and Gisela Kutzbach with daughter Angela visiting from NY state. Everyone very much enjoyed having a peek at the tiny nestlings.

The two gourds with early nestlings belong to the two adult purple martin pairs. All other nests are first year nests by subadults. It could be that the adult birds were the subadults that nested in the gourds last year. Adult martins arrive in Wisconsin more than a month earlier than subadults from their winter quarters in the Amazon region in South America. This explains the time difference in establishing nests and laying the eggs.

June 12
June 1
From the most recent data Richard Ness sent, we can expect the following:
Average hatching time is for Purple martins is 15-16 days. 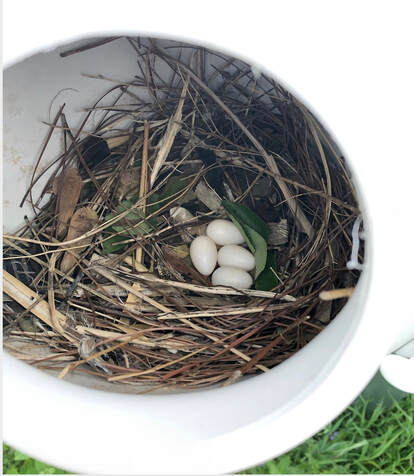 The first PUMA eggs of the 2021 season. Photo Richard Ness
May 23 – we have eggs!!
​
Richard Ness reports: "I checked on the Martins today Sunday May 23, 2021, and here is the first gourd with four eggs. This is the same gourd that last year had Martins. The three other gourds also had Martin nests, two of which look like they will soon have eggs also (green leaves present). At one point when I had the house down, there were so many Martins flying overhead that it was hard to count how many there were. There had to be over 12 or 15 Martins!"
May 15
Over the last few weeks six Martins have settled in the house, occupying three of the gourds. Richard Ness checks out the house twice a week or more. He reports today: "This afternoon I ... took this photo of six Martins resting on the the house. I removed the “fake” Martin about a week or more ago. So all the Matins are real, there are five on the house and one female sitting on the gourd. No sparrows today."

Six Purple martins at the house. Photo Richard Ness
April 30, Opening additional nest boxes
Chuck Henrikson reports: Will Vuyk and i got together at noon yesterday at the PUMA (purple martins) house and I showed him how to do various things with the house.  We spent an hour there. We opened all four sides and realized that some drawers had already been turned around so that 10 of the drawers were now open to the outside.  I had not heard that anyone had done this.  We removed two House sparrow nests and put pine needles in all 10 of the drawers.

Two adult & two subadult PUMAs perch on PUMA house after raising, plus a decoy. Photo Henrikson
While we did this 3 PUMAs flew around us vocalizing.  As time went on another one came flying in so we were up tow 4 PUMAs.  Near the end there were 6 PUMAs at the house, 3 adults and 3 subadults.  They were vocalizing all the time.  Two left after the house was up for a while leaving 4.

April 28, 2021 - Adult PUMAs at the house
Richard Ness reports: "This afternoon around 1:15pm I saw all four gourds with Adult Martins on them or going inside at the same time. There were at least eight martins at the house. This is my first time seeing any Martins this spring at the house.... all I have seen so far is one house sparrow until today.

One adult and one subadult martin. Photo Chuck Henrikson.
Early that day Chuck Henrikson visited the PUMA house. He reported: "I stopped by the PUMA house at 10:30 this morning and saw one adult and two subadult Purple Martins in and around the house and gourds.  The subadults were going in and out of all the gourds.  The adult remained perched on the outside.  These are the first i've seen this year." The next day, Chuck and Will Vuyk opened about half of the nest boxes in the house. ​

March 31, 2021 – Repair wind damage
Chuck Henrikson, David Liebl and Paul Noeldner met at the Biocore Prairie PUMA house Wednesday March 31 to repair the mounting for the new Purple Martin house gourds that were knocked loose by recent high winds. Stronger metal hanging straps were cleverly adapted by David to securely bolt the hanging rod to the Martin House. We were entertained by one of the resident Red-tailed Hawks perched at Eagle Heights Gardens, Song Sparrows and Red-winged Blackbirds singing, and a reported sighting of both a male and female Bluebird at one of the nearby Bluebird Boxes. Fresh pine needles were added to several open nest slots by Chuck and everything is ready for Purple Martin scouts to arrive soon. Photos by Paul Noeldner.
The current Scout arrival map on the purplemartin.org website shows that adults have arrived in Wisconsin and subadults have been spotted as far north as Arkansas.

Gisela and Chuck working the winch. Photo by Paul Noeldner.
March 14, 2021 – Grand Season Opening
On this glorious, crisp and sunny morning, Chuck Henrikson and Gisela Kutzbach met at the house to remove the winter covering of the winch mechanism, refresh the nesting boxes, and open two of them for occupation. During the last stages of removing duct tape gook with Goop, Paul Noeldner came up the trail, hauling in his wagon his do-it-all tool kit, four Troyer gourds and new aluminum rods, which he had picked up at Gisela's garage.
In the meantime David Liebl, on his bird walk from Bill's Woods, joined the group and pitched in. In about another hour, the four gourds were perfectly placed, the new perching rods installed, and the winch oiled one more time. The Purple Martin House is as attractive as ever.

We are hoping that the small flocks of purple martins that visited the house on their migration south last fall will take interest in the Friends sponsored Biocore house on their journey north again – and stay. It could also be that later in May / June the subadults, who hatched here last year, will return.

While the purple martins have yet to return to Wisconsin, the crew was happy to see a bluebird perch by one of the new, beautiful bluebird boxes. In addition, the group saw a juvenile and adult pair of red-tailed hawks and song sparrows singing nearby, and turkey vultures circling overhead.

Seth and Paul are our main mechanics; David, Nicole and Will are new to the team and will have their training sessions in April.