August 14. Both David Liebl and Seth McGee declare the PUMA house vacated for this season. The team will meet at the PUMA house on August 25 to organize the closing of this year and plan for 2023.
Click HERE for season records 2022 (PDF).    JEPG file
PMCA summary sheet for 2022
53 eggs
41 young
33 fledged Friends Prairie Partner Interns monitoring with Seth McGee, Biocore lab manager. Photo McGee
July 26-28.
On July 26, a beautiful sunny day, David Liebl, Gisela Kutzbach and Chuck Henrickson and his grandchildren counted eggs, nestlings and fledged purple martins. The Martin were swarming above – watching our group lowering the house, inspecting each gourd and nest box, photographing, and winching up the house again, all in 15 minutes. The parents were ready to feed their young with dragonflies and other tasty insects.

On July 28, Seth McGee and his group of the Prairie Partner interns supported by the Friends  monitored a second time within a week, in awe of the almost fully grown nestlings, ready to fledge. View the table below to see the progression of PUMA development from eggs to nestlings to fledged. The complete table from May to end of July can be viewed HERE. Four alert , well-fed nestlings in Gourd A have retreated from the entrance to the nest during monitoring and are eying the photographer. Also visible is one non-viable egg. Photo David Liebl Photos Seth McGee
May 26
Seth reports: Good news PUMA fans.  Richard and I met at the house today and found that some of the nests have eggs in them.  Six in total. Data below.  One nest had some green string in it, which Richard noted looked like a blade of brome grass in a nearby nest.  A black-headed cowbird sat on the house for a while and the martins didn’t seem to be bothered.  Cowbirds don't often parasitize cavity nests in this region but that might be something to keep an eye out for.  It would be interesting to note if it happens. Also notable is how much the entryway modifications (for European starlings) and competitor deterrence efforts (for house sparrows) have made a difference this season. Knock on wood.
If you’re stuck inside and need some bird calls to liven things up, here’s a quick video from today at the house (poor lighting and mower in the background included).  https://youtube/CI1NZ06fjUE

PUMA House May 26, 2022
Gourd A – No signs of nesting activity
Gourd B – 2 eggs
Gourd C – Very tall nest, no eggs
Gourd D – 1 egg
Box 4 – 3 eggs
Box 7 – Green leaves
Box 11 – Green leaves
Box 13 – Entrance closed. Missing box.
Box 14 – Extra large nest.
May 23
Seth reports: "I haven't lowered the house recently, but I checked on PUMA activity with binoculars yesterday.  Most of the PUMAs were busy carrying green leaves into nest boxes.  That includes males.   This is the first time in 2 weeks that I've noticed males carrying material into a nest.  As I talked about on Sunday's Field Trip, the gathering of green leaves is still somewhat of a mystery.  BirdsOfTheWorld says that at least seven hypotheses have been offered to explain it and there seems to be few controlled studies investigating the role of green leaves.  I'm going with "decorating the nursery"  😉 . 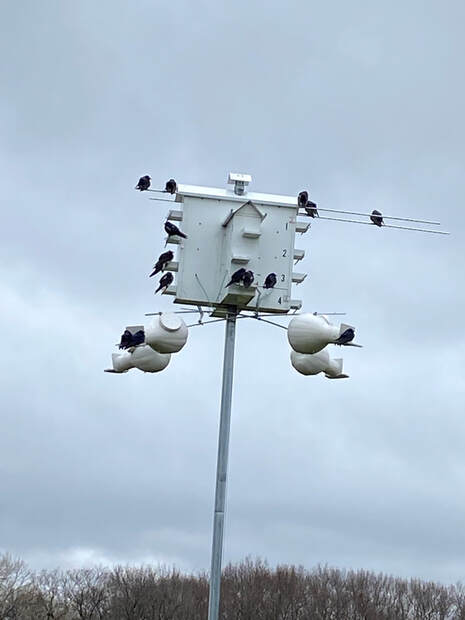 14 PUMAs observed at house on May 2. Photo Richard Ness
May 11. 11 martins at the house.
​
May 2.
What an exciting day! The chirp must have spread among the PUMAs. They kept appearing at the house in ever increasing numbers.

Seth Mcgee reported on May 1: "There were 2 Purple Martins flying over the prairie and vocalizing 2:30-3:00 on 5/1.  One (maybe both) visited gourd C a couple of times.  I was casting prairie seed and the Tree Swallows were swooping around me; perhaps thinking the airborne seeds were insects. One Barn Swallow was also in the vicinity. Maybe if spring ever arrives, the martins will follow."

On May 2, Richard Ness reported 2 Purple Martin pairs at the house at 2 pm. Photo David Liebl.
Photo April 11
This morning at 9 am Richard Ness observed two martins at the house, and later in the day. David Liebl also observed a martin at nest box 1.

April 8.
Richard Ness reports: In a snowstorm? Literally it is snowing here heavy, and I looked up and there's the first Martin of spring coming out of the snowstorm and making a bee line to the closest gourd. He landed there a minute, then took off and flew around and flew back straight into the house #4. It is 4:45pm Friday April 8th. Anyone beat me in seeing the first Martin?