Citizen Science projects in the Preserve

The Friends' citizen science volunteers collect and analyze data relating to the natural environment in the Preserve. They collaborate with professional scientists in designing and conducting these projects and work with Preserve staff to ensure that these projects support Preserve objectives and procedures. To join these efforts or obtain further information, contact preservefriends@gmail.com.

Acoustic BAT Monitoring Project -- read more
A team of volunteers use a GPS-linked echolocation monitoring device to survey the presence of bats along a specified route in the Preserve. The project is administered by the Wisconsin Department of Natural Resources, establishing baseline data on bat species and locations throughout Wisconsin. The project was started in the Preserve by Kennedy Gilchrist and Levi Wood in 2015.
​
In 2018, the student team of the UW-Madison Bat Brigade continued the project, with the Biocore Lab Manager Seth McGee as advisor. 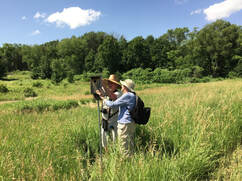 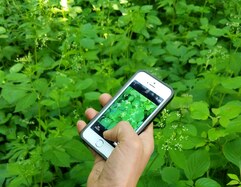 iNaturalist Monitoring Project
iNaturalistis is an app designed to be used by citizen scientists who want to collect data and share it online. Several of the Friends have been submitting observations online where the information can be used to track various species and record data long-term. There’s even a “place” defined for the Lakeshore Nature Preserve, so just those observations can be retrieved. In May, 2018 the Friends ran a training session to encourage more users to use the app. Now thousands of observations of hundreds of species have been recorded on the Preserve joining millions of observations worldwide. 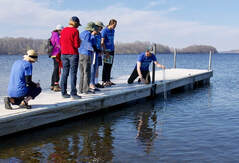 Lake Conditions and Water Quality Station – Near-shore, Lake Mendota
Beginning in May, 2019 a team of Friends volunteers will be recording near-shore lake conditions at the Preserve in University Bay using a data collection protocol developed by the Clean Lakes Alliance. Data will be collected twice weekly for five months each summer. The results will be recorded in a data base maintained by the Clean Lakes Alliance and will provide additional information to be used for analysis of the condition of Lake Mendota.This station will be one of 80 near-shore monitoring stations on all five Yahara lakes that report to Clean Lakes Alliance.
Current monitors: Matt Chotlos, Steve Sentoff, Olympia Mathiarapanam, Doris Dubielzig,  and Julie Limp. 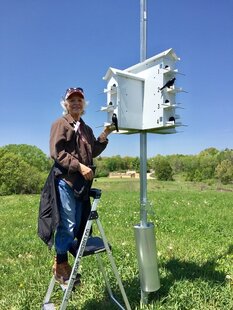 Purple Martin House - Biocore Prairie – read more
In spring 2017 a Friends Team of PUMA enthusiasts installed a purple martin house at the edge of the Biocore Prairie. The house is maintained by a group of six volunteers, who  monitored the house closely throughout the summer months, keeping compartments free of nests built by other species. By June, the structure had attracted four martins, two of whom nested and produced young. We were thrilled to report that the babies successfully fledged at the beginning of August.
In 2018, the house attracted only two pairs of Purple Martins. The presence of starlings prevented them from nesting successfully. Starling resistant entrances have been installed in spring 2019.
Prof. Anna Pidgeon is faculty advisor for this project.
Current monitors: Gisela Kutzbach, Chuck Henrikson, Richard Ness, Seth McGee, Nicole Miller, Will Vuyk, Paul Noeldner.